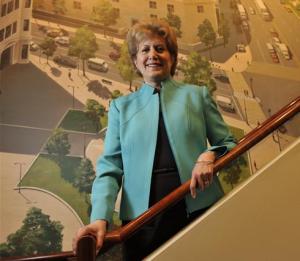 WASHINGTON — Today’s the last in Tracy Mullin’s
34-year retail career. She’s retiring as the 14-year
president/CEO of the National Retail Federation,
which represents retailers and chain restaurants.
USA TODAY met with Mullin recently to talk about
how retailing has changed, what stands out about
Congress and the retail industry and why the
world’s biggest retailer isn’t a member.

Q: How has the industry changed during your time
at NRF?

A: When I first started in retailing, department stores
were the drivers. They were mostly regional players.
Then you began to see the growth of discount
stores and specialty stores coming into their own.
Then there was tremendous consolidation. National
players were getting bigger and bigger and, as that
occurred, a lot of regional department stores got
gobbled up by bigger companies.

Today, we don’t really have a lot of regional players

in any of these areas. But I think it’s good for the
consumer because it has brought down the costs
through huge economies of scale. Thirty years ago,
if a retailer sold out of (a hot item) quickly, they
couldn’t replenish it. Or, by the time they
replenished it, it was no longer a hot item. Now they
can do it in a week, in some cases less.

Q: What changes have been the hardest for you to
see?

A: We used to have our big conventions and all the
big regional players would get together and chat. It
was all very congenial. They all wanted to learn from
one another. You don’t really see that anymore
because they’re all competing for the same
consumer dollar. I wouldn’t say there is hostility,
but in the last 15 or 20 years, it’s become a very
different environment than it once was.

I hate to see any of our members go out of
business. It’s heartbreaking, and we’ve seen a lot of
them over the years.

A: By far, it’s Capitol Hill. I started working on
Capitol Hill for Senate Minority Leader Hugh Scott
(R-Pa.) in the 1970s. He would go out on the floor
of the Senate and get into really vigorous debates,
and then they would all come back to our office and
have a drink in the afternoon. They’d go out to
dinner with their wives. The mutual respect is what’s
missing up there today. It’s really a pity. More and more
members of Congress are leaving their families
home because it’s a poisonous environment now.
Why would anyone want to expose their families to
that?

Q: Which CEOs stand out from your tenure?

A:There are so many. Some retailers who really made
a difference include Ed Finkelstein of Macy’s. He
created Macy’s Cellar, which was revolutionary in its
day. He turned what had been a basement into a
destination that everyone wanted to shop in. It was
almost like a French market with a bakery. It’s still
there, but it’s not the same.

Then there’s Marvin Traub, who was a genius as the
head of Bloomingdale’s. They would pick a country,
and that would be the country they’d focus on for a
year. You’d learn about the products they made, the
food they served. It was really revolutionary,
brilliant retailing.

Q: Is it true the NRF turned down Wal-Mart?

A:The story is that Sam Walton, shortly after he built
the business, made a pilgrimage to New York to
meet with the then-president of the National Retail
Merchants Association (now NRF), which primarily
represented department stores. He asked if his little
company, Wal-Mart, could become a member of
NRMA, and he was rejected. They didn’t want a
discounter there. It was a very homogenous
membership. They all saw eye to eye. I don’t know
what went into the thinking. It was clearly a bad
idea.

They created a competing organization (now known
as the Retail Industry Leaders Association, which a
lmost merged with NRF last year). Since the ’90s,
we have broadened our reach dramatically, so we r
epresent chain restaurants, grocery, pharmacy,
Internet and specialty stores. We really do represent
the entire breadth and diversity of the industry.

Q: Except for Wal-Mart.

A: We’ll get them eventually. It will happen.

Q: You have had what many shoppers would think
is a dream job. Was it?

A: It’s just fortuitous. I love to shop and love to tell
people I shop for a living. It’s so interesting to
travel around the country and the world looking at
new retail formats and new products. But when I
travel, I rarely buy anything. I’m more of a looker
than a buyer. My husband’s always saying “Why
don’t you buy more?” God bless him.